More From Our September Flockstars! 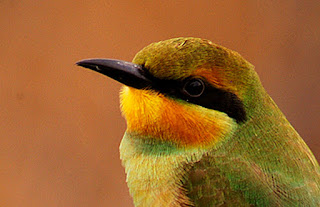 Spring has sprung and what a beautiful time of year it is here at Kingfisher Bay Resort.
The resort's Wallum is simply teeming with bird life as Fraser Island's wild flowers have burst into bloom. The aromatic and nectar filled flower spikes of Forest Grasstrees continue to attract Honeyeaters from far and wide. Dusky Honeyeaters, Scarlet Honeyeaters, White Throated Honeyeaters and Blue-faced Honeyeaters could all be seen gorging themselves on the nectar.
The beautiful red inflorescences of the Bottlebrush are also in bloom and are equally as attractive at mealtime for our resident Honeyeaters.
Birding along the main road was stunning this month and our eagle-eyed twitchers spotted Emerald Doves on three separate occasions. These striking birds, with their iridescent green wings, are mainly found in rainforest and rarely seen within the resort grounds, causing our Rangers to do a double-take!
Adorable Eastern Yellow Robins were also spotted on several mornings flitting through the undergrowth, collecting twigs to construct their tiny nests. Fraser’s resident flower peckers - Mistletoebirds - were also seen on several September mornings - happily picking fruit from clusters of Mistletoe high amongst the Eucalypts.
There was plenty of activity down on Fraser Island’s western beach with many of our magnificent raptors making an appearance. Whistling Kites and Brahminy Kites were seen on many mornings soaring gracefully over the Great Sandy Strait scanning the waters for fish prey. Ospreys and White-bellied Sea-Eagles were happy for us to watch them as they perched majestically in beach side Eucalypts.
We’re pleased to report that our Rainbow Bee-eaters (pictured) are back on island! These stunning birds can migrate all the way to Papua New Guinea during winter but their return to Fraser’s shores is a sure sign that spring is here!
Hooroo until next month, Ranger Kat. 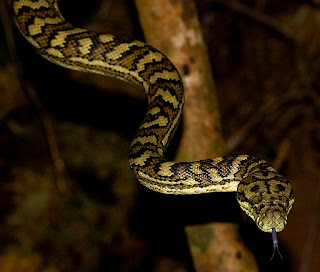 The arrival of spring and the abundance of nocturnal wildlife - spotted on our nightly guided walks - made us get through September on Fraser Island with a spring in our step.

It was business as normal for our usual suspects - the Squirrel Gliders and Fruit Bats - in and around Kingfisher Bay Resort - who were seen indulging in the rich array of nectar filled blossoms.
However, it was our Fraser Island reptiles that really impressed Rangers and guests alike this month. A beautifully sound-track comprising the choruses of various native frog species provided a perfect accompaniment to our nightly wanderings... and from September 1 we were off to a fantastic start.

Notable amphibian sightings included rare Striped Rocket Frogs and the Cooloola Sedge Frog, plus additional reptile sightings of Asian Wood geckoes and a beautiful Carpet Python (see above).
But the fun didn't just happen on land... in the calm waters of the Great Sandy Strait, a number of larger fish species were spotted off the resort's jetty stalking the shallows for prey. A sizable Barramundi and two sightings of large Barracudas left us in awe of their sheer size and grace in the water.
Two particular species of birds also made regular appearances this month. A Tawny Frogmouth, sitting silently on a eucalypt branch, was quiet happy for us to pop in and say g'day on many a night. And on one of our Wallum walks, we stumbled across two Pacific Black Ducks quietly roosting on the shore of one of our window lakes.
The clear, Spring nights made this month's night walks truly memorable. We think it was the combination of new spring-time animal sightings, alongside our old favourites, and some spectacular clear night skies above Fraser - including one where we saw plenty of shooting stars.
Until next month, hooroo for now. Ranger Kat.