They Fly Through The Trees With The Greatest Of Ease... 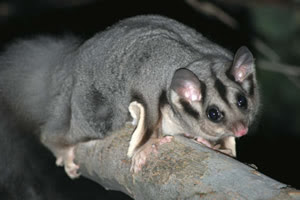 During March we looked again to the trees for signs of life with Tawny Frogmouths and Squirrel Gliders (pictured left) both regularly sighted on night walks.

Frogmouths are the masters of camouflage during the day as they blend in amongst the rough bark of different tree species. At night however, they become stealthy hunters and can often be seen swooping down to the ground to snap up juicy insects.

So too, our Glider population are always entertaining as they scamper through the trees with effortless ease. Squirrel Gliders, although small, can glide up to 50 metres between trees and it's quite a sight to see!

Some of Fraser Island’s snake species made an appearance - with pythons being sighted on several night walks. These docile nocturnal creatures move unassumingly through their Wallum home, no doubt in search of a tasty amphibian meal. Carpet Pythons can grow up to four metres in length and on one particular night guests were delighted to witness not one but two of these beauties in plain view as they lay on the bitumen road – well away from human activity - absorbing the day’s residual heat.

Off the Jetty this month Estuary Stingrays were about as usual, as were several different types of Baitfish that inhabit the clear calm waters of the Great Sandy Strait and Hervey Bay. However, it was the Eastern Shovel-nosed Rays that seemed to want to hang with us this month. These interesting creatures have the distinctive head of a Ray and the body of a Shark and, at night, can be seen gliding through the shallow waters in search of crustaceans, molluscs living under the sand.

Catch you for the April 'creatures of the night' round-up here on Fraser Island, cheers Ranger Kat.

Living In A Twitcher's Paradise 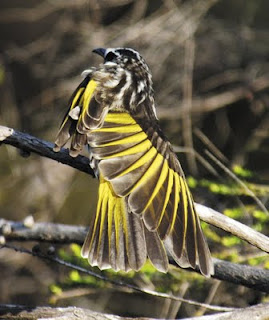 Well Bird Lovers, what a month we’ve had here in paradise.

However, it has been the Scarlet Honeyeaters that have been the highlight in March, with their beautiful melodic calls filling the morning air. These adorable little birds are a delightful addition to any bird walk - especially when their bright scarlet plumage is illuminated by the morning sun creating a stunning contrast amongst the green Eucalypt foliage.

Fraser Island’s western beach has also been a twitcher's paradise this month with many species sighted. The Welcome Swallows were abundant as usual, and kept our guests captivated as they darted and performed aerobic manoeuvres above their heads in their eternal search for food.

Crested and Caspian Terns also made appearances this month and majestic White Faced Herons were seen gliding over the coastline.

John Knight and our mates from the Hervey Bay Bird Watchers club came and spent time at the resort and kept us abreast of their sightings – high on their list of top birds was a Spectacled Monarch, the Pheasant Coucal, the Sacred Kingfishers and an unconfirmed sighting of an Eastern Spinebill.

A White Bellied Sea Eagle also spent time in our neck of the woods and a pair of Pied Oyster Catchers decided to take an Autumn break and spend some time on our shores - their striking black and white plumage and bright orange beaks a stand out against the turquoise waters.

For those that follow our regular tweets and birdie blogs – we’re certainly clucking about one stand-out sighting this month… a Fan-tailed Cuckoo was spotted by an eagle-eyed twitcher amongst a stand of Swamp Mahogany down by the western beach. This beautiful creature flitted from tree to tree showing off its impressive tail complete with notched white feathers.

April has a lot to live up too in the bird watching stakes and we’ll be there to record it.

Hooroo… until next time from Ranger Kat.