We're Just Batty About May On Fraser!

Hi there Tree Huggers - winter is almost upon us with cooler mornings, warmer May days and perfectly clear blue skies… this time of the year is just perfect for spotting nocturnal wildlife!

Our Squirrel Glider population were the most active they’ve been all year. These adorable little creatures could be seen feasting on flowers high in the Eucalypts and squabbling amongst each other.

Night walkers were delighted as they leapt from the edge of the branches and glided gracefully to the next tree!

Yet more guests on a night walk were lucky enough to spot a large Carpet Python slowly slithering its way up a tree in the Wallum - proving we weren't the only wildlife watching the Gliders!

The various lakes around the resort grounds have been a hot spot for wildlife. Microbats (pictured top - photo courtesy of DERM) busily went about catching their evening meal oblivious to the walkers below them watching fascinated. These tiny creatures display amazing aerobatics as they soar within millimetres of the water – skimming insects sitting on the surface. Attracted by our night walk spotlight, they sometimes came within millimetres of our faces!

The usual suspects congregated under the jetty during May. Estuary and Blue Spotted Stingrays cruised the sandy bottom, with the occasional Shovel-Nosed Ray and Flathead fish joining in the fishy fun. Schools of Herring brought the dark waters to life, and these skittish fish jumped out of the water in all directions when exposed to the spotlight – the kids on the walks loved it... and so did the big kids.

We look forward to seeing what sort of wildlife winter brings – see you next month.

Warm May Days Serve Up Some Hot Bird Spotting! 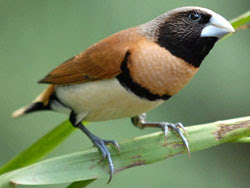 As the autumn season comes to a close, the morning sun starts to creep over the sand dunes later and later – which means we can sleep in longer, before heading out on our early morning bird walks.

While crawling out of a warm bed becomes increasingly difficult, for any Birder intrepid enough, this month has proved that now is the perfect time for spotting our amazing avian residents.
The sweetly scented blossoms of the resort’s Swamp Mahoganies have drawn in an array of magnificent bird life. Rainbow Lorikeets, Noisy Friarbirds, Spangled Drongos, White-Throated and Lewin’s Honeyeaters were all seen feasting noisily on the abundant nectar these plants produce.
The various flowering Paperbarks around the Wallum were also teaming with our smaller feathered residents as Scarlet, Dusky and White-Cheeked Honeyeaters busily flitted from flower to flower.
This month also marked by several rare and unusual sightings, much to the delight of guests and rangers alike. Chestnut Breasted Manikins (pictured above) were sighted down by Dundonga Creek, the first Buff-banded Rail sighting in years occurred on the bank of one of the resort’s lakes and flocks of rarely seen Topknot Pigeons have been spotted on several mornings soaring over the resort grounds.
Both male and female Australasian Figbirds were also sighted in the Wallum. These quiet and unassuming birds made for delightful additions to this month’s bird walks and have certainly given us something to tweet about.